Some reflections from a Knutian point of view

For most of us the 5th of December 2006 was just an ordinary day – so we thought but little did we know then! At 3 pm on that day a polar bear cub was born at the Berlin Zoo. I don’t think I’m exaggerating when I say that moment was the beginning of a whole new era in our lives! In Januari/Februari the first news and pictures were published about the baby polar bear called Knut  and his keeper Thomas. This started a worldwide epidemic now known as Knutitis (a desease that can’t and mustn’t be cured!). People throughout the world wanted to know everything about this miracle!

In April Knuti came out for the first time and the daily shows began. The queus were long when thousands of people wanted to see the little darling. RBB started the weekly programs from the Berlin Zoo and started even hosting  Knuti’s blog that soon became a popular hang out for all Knutians! Also many devoted fans started their own Knutsites and blogs. Songs and poems were written about Cute Knut, photographers started visiting the Zoo daily to provide the Knutians with new pictures. The brown basket and the green “kuscheldecke” soon became very familiar to us all! The Knuti fever was spreading very fast! An average Knutian is a woman in her best age – most of them have cats, dogs or both!

By this time many husbands and boyfriends couldn’t help noticing that their wifes/girlfriends got something special in their eyes when they saw pictures of Knuti or visited the Knut blogs. I suggest we give a standing knuvation to all the hubbies, boyfriends and even our pets for their patience with the us during this year!!

The amount of inhabitants in the Knutian world was increasing all the time. Being a Knutian is a 24 hour/day “job”. It’s not enough to sit by the knuputor at home – no, we just have to peek in the blog/s now and then while we are at work, too. And it’s like a vitamine injection to see new pictures of Knuti and read all the latest comments – a true Knutian thinks this peeking should not only be allowed but it should be obligatory!!

Being a Knutian means also love, friendship and caring across the frontiers! We live in different parts of the world and speak different languages but we never have any problems understanding each other! As one of the Knutians said: We speak through our hearts.  Besides - we have also created a new, special language – Knutish  - to make the communication easier!

The daily show with Knuti and Thomas was the great attraction in Bärlin. When I visited Knut in May/June I could hear all possible languages spoken at the Zoo.

A big moment was when Knuti went into water for the first time. Thomas followed him into the ice cold water and of course, the audience was overwhelmed! Sometimes Knuti hitch hiked on Daddy’s back! 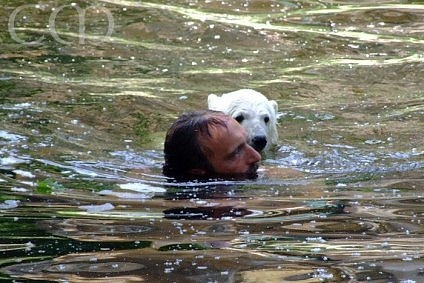 On the 9th of  July the show was abruptly stopped and there was a lot of talk about the bear becoming too dangerous for his keeper. The Knutians shook their heads and couldn’t believe it!

Newspapers wrote that now that Knuti’s getting bigger the interest for him will diminish. Oh boy, were they wrong! The Knutians don’t abandon their darling just because he’s getting bigger. Besides – he’s only getting cuter! What a performer he is with his perfect timing. Who can resist those looks towards the audience asking “Did you see that?”

How we have enjoyed seeing Knuti play with his squeaky ball! What energy that furry fellow has! Knuti’s jutebag shows are a classic! It’s incredible what he can do with that bag not to mention his imitations of elephant, tapir, waiter and even Fidel Castro smoking his cigar!

The Knutians were very worried about Knuti when Thomas had his three week vacation in August. Knuti did very well even if we could see he missed his Papi. When it was time for Thomas to come back the Knutian world was almost breathlessly waiting for the pictures and reports about the reunion. And they were richly rewarded! The tears of happiness that were shed that day could have made a new river!

In the end of August Knut hurt his paw and again the Knutian world was worrying. Dr Schüle made himself (temporarily) very impopular when he had to anaesthesize Knuti! Fortunately the paw healed quickly. Our Knuti showed though great cleverness! He had of course noticed he was getting extra attention when he was limping so he kept on limping when there was somebody watching him. We had so fun with our clever fluffy friend! 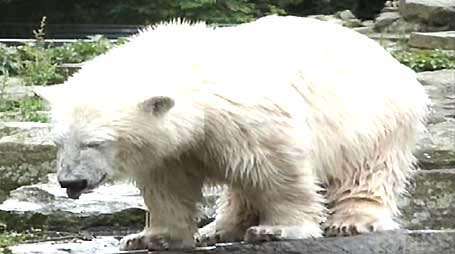 Also Knuti’s weight was a topic which was discussed lively in the media and in several blogs. Knuti was the one who took it very calmly and continued to enjoy eating his croissants….

Every little incident is BIG news for a Knutian.

The Poo of the Year!

Every single thing Knuti does is great news in the Knutian world. When Knuti didn’t quite make it to the toilet everybody was praising him for being a clever bear who didn’t want to poo in his pool! Accidents DO happen! I could never have imagined that a pooing bear would make me – or anyone else - so excited!

Raking, shovelling and fooling around….

The new mulch bed was headlines for weeks! It was so nice to see little Knuti lying on his bed playing with his jutebag or squeekyball or making his gymnastics! The mulch bed needs to be taken care of and when Daddy came in with his shovel Knuti always wanted to help him. Of course, Daddy couldn’t resist Knuti’s wish to fool around a little… 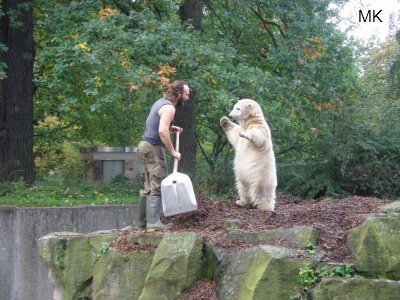 In November the Zoo director forbid Thomas Dörflein to play with Knuti in the enclosure which upset many Knutians. The feelings calmed down when we learnt that our dream team still spends time together in the “back room”. Knuti is een kleenet kind and needs hid Daddy!

The whole Knutian world celebrated when Thomas Dörflein was awarded by the “Landesverdienstorden” in October. We were all truly happy for him. That man deserves all the prizes and awards in the world!!!

Oktober the 5 th  the Knutians started a new tradition – at 8 o’clock in the evening (CET) everybody was to raise her/his glas and sing Happy Birthday to Knuti. We should, of course, eat a croissant, too!! This celebration on the 5th of every month  is not just a salute to Knuti but even to the friendship and love in the Knutian world. The Knutians are like the three musketeers – one for all, all for one! 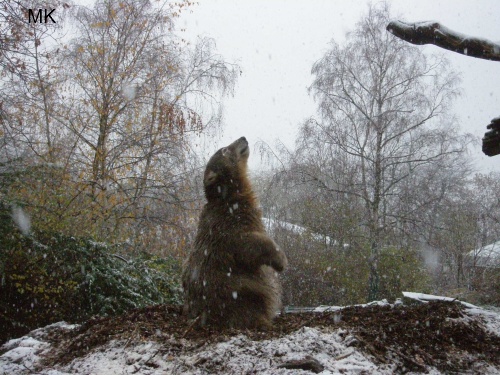 One Saturday in November the first snow fell down in Berlin. Knuti was first very suspicious about the white stuff but became soon aware of that the fluffy flakes were actually very funny! He could have so much fun in the snow.

Today we Knutians celebrate our white bear’s first real birthday! There will be many visitors from many different countries in front of Knuti’s enclosure. Those who can’t be in Berlin will have a toast at 3 pm but no matter where we are at that moment – we are united in our love to Knuti and his keeper!

We could say that Knutitis has become a way of life! Thank you Knuti and Thomas for making this year so special to all of us!

Good friends share the bad days and the good days. They argue and even quarrel but being good friends they always forgive each other. Why don’t we give Knuti a very special birthday gift –a Knutian world where peace, love, understanding and tolerance rule! I’m sure he would appreciate it!

The United Knutian Federation through Mervi