More
Knut and Spring in Zoo Berlin - by Patricia Roberts

And again, after my January visit, I started dreaming of visiting and seeing Knut in Zoo Berlin again. Last year, I decided to celebrate my birthday there and since I loved the result so much, this year, I wanted the same scenario. With this big difference that certain other Knutians learned about this plan and also made reservations and organized a meeting.

Well, given my age, I was wondering whether I would have the same feelings, expectations, dreams and whatever like last year. And yes, without any pressure or force, the same feeling and even the same thought just like the very first time popped up in my mind when the train was leaving Leuven: Knut, here I come.

After the traditional and obligatory check-in, leaving luggage in room, etc., rush to the Zoo.
Strange but true, it was not straight to Knut this time, because I saw that Ko Raya was outside with the other elephants. Oh my, compared to these giants, she is really a little one. Before they went inside again, they received a good brush massage, and a rather dusty one.

But then of course, I wanted to see Knut. This young bear was enjoying his afternoon nap in the sun. And I must say that in fact this was the only time that I can remember him sleeping during my stay, because the other days Knuti was extremely active.
So, I decided to pay the other brown and white and nosie bears a visit. The old Jana was also outside in the enclosure. Her fur looks extremely fluffy and has a warm brown colour. The coatis are as usual as cute as can be. And the big white ones discovered that it was Spring. Especially Lars and Tosca were in the mood, so maybe there might be new Knuties at the end of the year.

Made a little tour and went back to Knuti’s enclosure. There I saw Bea, and that was the real start of a lot of fun. For those who do not know it, Bea has spent a lot of time during her childhood in the Flanders and learned Flemish there. So, I was rich and fortunate, while being abroad, I was able to speak my mother tongue. And furthermore and very important too, she adores food as much as me!!

During my whole stay in Berlin, the weather was simply perfect, sunny and warm enough. However, this means also that there are a lot of visitors. Especially on Friday, there were a lot of children in the Zoo, most probably because of their last day before Easter vacation.
Funny story, I was in the Kinder Zoo (remember, you may feed the animals there). While I was putting my coins in the automat, there were children standing around me (their money was gone), so I shared the food with them. At a certain moment, my coin got stuck in that thing, so fun was over there and I went to another automat. After a few minutes, these kids were back. Don’t ask me how they did it, but they managed it to get the coin out of that automat and brought it back to me. I found this so nice that they were allowed to keep it and to use it for food for the goats.

Especially here in the Kinder Zoo, one could see that Spring finally arrived, everywhere little young animals. And not only there, but everywhere. As I already said, there is Ko Raya, there is Benita, there is Junita (the little Dromedary, well, I hope that this is her name), the little hippo’s and mini “speck-roll”, since they have no name yet, or at least as far as I know, not).

Every time when I am in Zoo Berlin, I make great plans to visit everything there. Well, forget it, never works with me, I do not have enough time. But this time, I managed it to visit the Apes House (and actually, for the first time in a decent manner). There is a baby mandrill. Well, let me tell you one thing: be glad it is not your son (OK, I admit, a human being can never have an ape as a child, or can they???) . Never saw something so funny ever before, but also not so wild and lively. I think that the mother must be at the end of her forces and nerves every day and every night. Was also quite impossible to take a good (read sharp) picture of it, that baby was jumping, climbing, running all the time. Did exactly all that it was not supposed to do.

But of course, apart from al these new-comers, there are also quite some “anciens”, like Krümel and Felix, the lions (Paule, Amira and Yazeera), the tigers – which – again lucky me, I saw for the first time outside, BaoBao, the argus pheasant, and so many more. And all and each of them is worth a visit, believe me.

As you all know, there are a lot of very nice sculptures of animals in the Zoo. During the Winter, they are packed in kind of wooden boxes and so to protect them against the frost and even at this moment, some still were (for example, the big polar bear fountain, the little statute at Knuti’s enclosure, to only mention a few).This time, I took pictures of some realizing that if my pics of the real specimen fail, at least I would have these (models do not move that much). And in most cases, the sculpture indicates the kind of animals one will find there around. However, there is one that I do not like so much, namely the one representing a lion. And in case of the sculpture of the fishing otter, I was not lucky because the living ones hided all the time. But the best combination of sculpture and related enclosure/animals is the one of the German shepherd and the Kinder Zoo, because both are bringing things back to their importance and size. So, when one is seeing it and thinking that he/she is or might be important, well, forget it, we are all humble human beings and per definition, we fail. 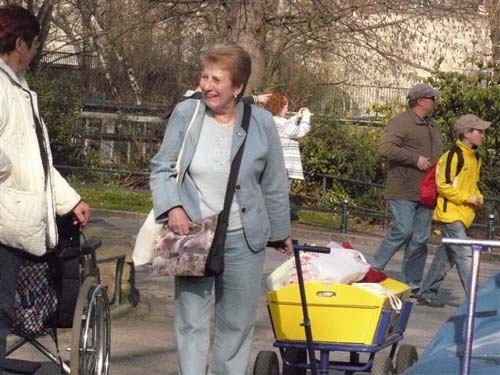 As you all know, at the occasion of his second birthday, Gudrun organized the Knuti-money collection. Well, on Saturday, April 4, there was again a gift session for Knut & Co. Furthermore, I learned that GiselaH was also going to bring deer for the wolves and wild dogs. So, that Saturday morning on our way to the Elephants House, we met both ladies with the “bollerwagen” (or how do you call this again in German?). The deer was discretely packed so that the other Zoo visitors could not be shocked or think that Gisela has been hunting in the Zoo. And based on the reports of Sunday, April 5, it seems that the wolves nor the dogs did complaint. 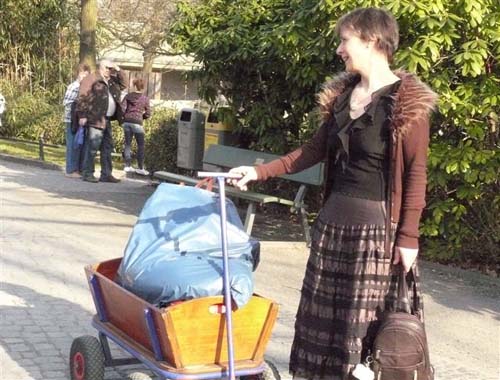 But what impressed me the most is the care and the ove that Gudrun is silently showing when she is preparing these kind of gifts. She is not only thinking of Knut, but also of the other bears. And more particularly, she makes something very special out of it, like waffles for the baby (“lippen ??,”) bear, a handmade jute sack filled with toys for Knutie-boy, old sheets for the elder bears (who, as she told me, adore it to tear them apart), exotic fruit like mango and coconut (which are in general too expensive for the Zoo to put it on the daily menu, which I can understand immediately). 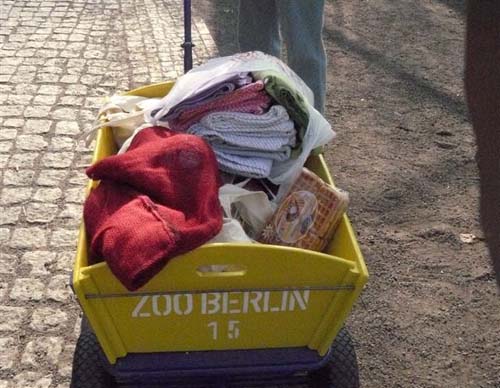 Another great advantage is the fact that the normal “Berlin Visitors” know all “new” stories, like new babies of whatever kind. And they know the keepers. Another thing that catch my attention. While we were wondering whether little Benita would come out for a walk there was simply Yeo who knocked at the door to ask. At the very same moment, I realized that most probably, this is not a thing to do in a lot of other zoos. I can already imagine how they are barking and biting when you ask something. But, apparently, it is possible in Zoo Berlin.

Since it is for me almost impossible to stay at the same spot for a longer period of time, I was often running around while the others were still enjoying their drink. Most probably not very polite or nice of me, but nevertheless a good opportunity to discover new places and enclosures. Which made me realize that I need to come back a few times more before I can say that I have seen it all.

During my stay in Berlin, quite a lot of Knutians, Berliners and non-Berliners, were in the Zoo. So, I had the pleasure to meet them and most of them for the first time (unfortunately, I was not having the good luck to see Spreewaldmarion again). This resulted in walking around, drinking a coffee, having our meals together and the like.

I am quite sure that now I am forgetting a billion stories to tell, and therefore I better stick to Knuti and my impressions about him and the like. Well, he is still the same adorable young and beautiful bear. He is still the same one who is enjoying his toys and games and visitors. But … his enclosure is becoming smaller and smaller.

I know that there is a group asking for “Knut forever in Berlin” and a group “Free Knut”. Well, according to me, they are both right and both wrong. And I refuse to side whoever of them, because according to this humble person, there is still a solution in Berlin – whether Zoo or Tierpark (if only there is a good will and most importantly, money). I know that I am not an expert, but I do not think that Knut is still able to live or survive in the “semi-wild world” (he is too fixed to humans and will never loose that need, and this since the day he was born). Most of you all will hate me for writing this, but I think that if ever there is a possibility, they better keep Knut in Berlin, and if possible in a bigger enclosure and eventually with a companion (if ever that is still feasible because he never had to share with a bear, he actually barely knows what that kind of animal is). Again, according to me (and for those who disagree, please do not address your thoughts, ideas, theories or whatever to me, since I am only expressing my private opinion and, per definition, I am not interested in fights), Knut is a lost case. And therefore, mankind (the ones who raised him, took care for him and visited him) must now take their responsibility and care for him. This might sound sad, but doesn’t have to be so. Just simply accept the shortcoming and failure (after all, the bear is not to blame, without his keeper(s) he would even not have survived).

Well, to end this report, I would like to repeat the words used by two Knutians, a Berliner and a non-Berliner, “this Zoo is a real paradise” and furthermore, I can warmly recommend everybody to celebrate his/her birthday there, surrounded by a lot of friends and an adorable young polar bear.

Have a nice weekend,