Nalle and Mimmi (the owners of Mervi) - Malmö, Sweden

December 10 in 2009 was a very special day for me and my husband. We received two new family members - the beautiful kittens Mimmi and Nalle. An organization called Skånekatten had given shelter and taken care of these lovely cats. This organization has a special koncept - the cats are living ordinary family life with three ladies in Malmö. Living in a flat instead of a cage gets the cat used to people and other cats which makes it easier to find homes for them. Alice, Eva and Kim - thank you so much for your efforts to help homeless cats. Thank you for Nalle and Mimmi!

Nalle the Soot Nose is a very friendly cat who loves to cuddle and purr ...

Mimmi is a beautiful girl who knows exactly how to get Daddy make her wishes come true!

C'mon Nalle - give me high five!

Now this is interesting! I wonder how they managed before without our help!

Kikki and Wapiti - Owners of Inge from Copenhagen 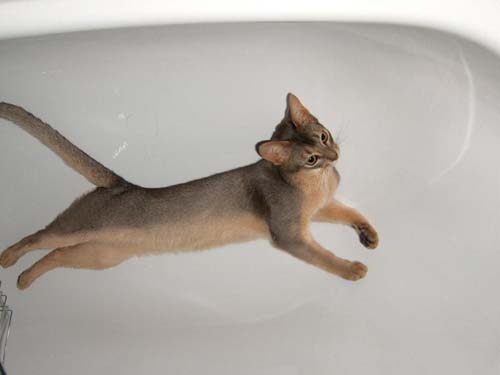 Rose looks like a very happy cat - just look at that broad smile! Here's Ralph's Orion Troll Bear - almost as big as Knut! He has also smaller friends to share his dinners with!

I wonder if this is the bear who travels in Ralph's breast pocket....

This is me on one of the huge sandy beaches of the Atlantic Ocean about 20 km north of Bayonne in summer 2010.Because it can get pretty hot, Raspband and Bärgit always build some shelter for me and have lots of water for me.

But let me tell you a secret: I do prefer snowscapes to dunes!Your firend Red Baron

This is me today during the Schneegewitter. Oh boy, did I like it. Is there a better place to enjoy the snow than my yard?

A happy howl from your friend RB

Red Baron has crossed the Rainbow bridge during the Summer. We will miss the wonderful howler.

Nadia and Mistaya - Owners of Christine and the knusband

Nadia, the lighter colored girl, is 9. She is our princess.

Mistaya, the darker colored boy, is 5. He is our little devil!

Luzi and Anira - the owners of Velvet

Luzi crossed the Rainbow bridge in May 16th 2011

Ellie - the Christmas miracle for Velvet 2011

Hello! I'm Rosie - one of the owners of Knuti-Judi.

The Cat Gang and Gandy, owners of Sarsam

Clover ("Chloe") came to us from our veterinarian in 2004, when she was 4 months old and already "worldly wise." She is the self-appointed mother cat to Sam and Sarah, the three bonded immediately upon meeting.

Sam and Sarah, brother and sister, came from the local animal shelter in 2005.

They were given the job of "Grandmother Companions" and performed their task faithfully and enthusiastically.

Ebony, our "beauty queen"! She was less than a year old when she appeared on our doorstep in 2007. She is very opinionated and will scream at anyone who bothers her!!

Sarah loves to tease her.

You have already met Silver. He arrived in our yard in 2010, promptly met the local porcupine, and had to go to the doctor. He and Sam are becoming good friends.

This is Two Paws, named by the local children for his double front paws. You can see the second little paw consisting of three toes on his left paw in this photo. He has

been in our neighborhood for over 10 years—fiercely independent but very loving. He is staying with us more and more. His nest and food are in the basement which is where this photo was taken. He has a voice like Carol Channing.

Last, but certainly not least, is Gandy who we met in 2006. You all know his

story! He is intelligent, mischievous, opinionated, and bonded to my Knusband!

The picture on the right is Gandy holding court in his parlor. The only cat he allows to sit on top of his dwelling is Sarah! A sharp rap of his beak to his parlor’s ceiling sends the others running.

Hi there! I'm Sadie - the owner of Susan in Ohio, USA

Sweet Sadie crossed the Rainbow bridge in the Summer 2012. We will miss you sweet cat lady.

Cosy and Cool - friends of Bärgit

Here are my sweet grape pickers off to new adventures, this Sunday, September 2nd 2012.

I haven't come up with good nicks, since their personalities have to grow to show.

On the left is the Cosy and on the blue leish you can see Cool.

I'll stick to the color code - Cosy has got a copper leish and necklace, Cool cool blue ones.

They have proven themselves as very talented gardeners and have improved their skills in digging, picking up twigs and branches, tasting plums, grapes, leaves of grass, tress and brushes.

That all sounds very promising.

Happy Winter season despite the evil virus!
by Mervi | 247 comments

Happy Summer time to everybear and everybody!
by Mervi | 773 comments