Doro II  15.01.2008
Back on the ground, at the Bearlin zoo, everyone watched the good Captain Yeo and her Starship disappear into space. We’re lucky to be alive they thought. However, all of a sudden Delilah started shivering and clung to Samson’s bushy tail. What on earth is the matter with you, asked George, who had just taken his pill and felt on top of the world. Gawd, I’m feeling giddy, said Delilah, Bearlin’s such a huge city, and I’m not particularly looking forward to meeting the mighty King Knut. What will he say? My fur is dripping wet, and I’ve lost my looks completely. He’ll despise me ... *sniff*. Oi Delilah, cried Samson and shook his majestic head, let go of my tail and stop acting like a frightened mouse. Everyone’s having fun but you. Look, Rocco, Miffe, Floyd, Fry and little Lila are even doing a Bremen Town Musicians stunt ... Nothing will happen to you; you’re perfectly safe. Remember, Herr von Rottweiler has everything down pat. And from what I’ve heard the king is rather a benign sovereign. By the way, he loves his food! You can always tempt him with a French croissant. But have some cream first, said Harry, that’ll chase your demons away. Delilah calmed down, licked her paw, smiled her brilliant feline smile, and then the entire party started striking up the song “Janz Bearlin is eene Wolke” ...

Linda 15.01.2008
. . . so as Wolfgang von Rottweiler prepared Delilah, Samson, Harry, George, Charlie, Fry, Floyd, Rocco, Lila, Miffe to enter the Lion's Gate at the Zoo Berlin a taxi cab pulled up in front of the anxious group. To their suprise out stepped Bodhi and Yamuna who had missed the magic carpet and the Starship Knutiprise --- they managed to catch a direct flight to Bearlin from Seattle.

George, who was feeling quite chipper filled them in with all they had missed . . . Lt. Worf, the transporter and all the excitement of being on a Starship! Bodhi and Yamuna listened attentively. Then Yamuna asked "have you had dinner? I've heard all about Mervi's Fireside Cafe. Could we go have some dinner? I know we will run into King Knut there"

Wolfgang thought for a moment, wondering why he had not thought of this. "Yes, let's. But, please, straight to the Cafe. No stopping at the Tatoo Zoo. I don't have permission slips for any body art!"

Rosemary  16.01.2008
All the animals were very excited to be at Berlin Zoo! They were also a bit hungry, and wanted to have something to eat at Mervi's Fireside Cafe (the only place in town!), but before that they thought: we've seen those Abendschau videos that our owners love so many times: let's go find some of the places in them!

So Wolfgang von Rottweiler, Delilah, Samson, Harry, George, Charlie, Fry, Floyd, Rocco, Lila, Miffe, Bodhi and Yamuna walked along the paths round the Zoo that they had all seen SOOOO many times. Then they went into the playground and played on the swings, and also on the special slide where they had seen Knut and TD playing together last summer - that was great fun! Imagine their surprise though: after that they went for a run, all playing tag together in the long grass, and suddenly they realised that another one of the Pets was with them.

"Hallo" said Oso, " I missed the first Magic Carpet, but I hitched a lift on another one which was coming this way - we stopped to pass over Luisa's house on the way, like you all did, and that poodle showed me the way you had all gone! So here I am too!"

The Knuti gang were so pleased to see him and they told him about the plans for a visit to Mervi's Fireside Cafe later on. They were all very excited!!!

Woof woof woof, meow meow,
let’s have fun, let’s have it now
Let’s join paws, let’s shout and sing
Together we shall cheer the King!
All the pets of the wild herd
Cats and dogs minus the bird
Serenade the mighty king
He who reigns at Zoo Bearlin!

Eva Gregory 16.01.2008
It has been an awsome day here. We have had visitors from all over the World! At lunch time a l o n g stretch limo pulled up with current and new members of the KFA. Herr Wolfgang von Rottweiler had called ahead an told us of the arrival of many for lunch. They new members have come to Bearlin to see for themselves and meet Knut Dorflein who has become a household name in their homes. Being curious, as cats and dogs can be, they had to see for themselves what King Knut was all about. And . . . they had heard many tales about Mervi's Fireside Cafe and all insisted that Wolfgang take them there for lunch today. As they came in the door they were greated by our tall, white fuzzy waiter with the cute ears. At first they were stunned, but we explained that Mervi's Fireside Cafe was a place of magic and to just relax and enjoy themselves. Once they were all seated a major discussion of menu items were discussed. Explaining to them that we could meet all of their dietary needs and wants peace once again settled upon their tables.

With the wonderful help I had in the kitchen I was able to serve our traditional menu along with some special items required by some of our guests. I had to send Luisa out to find prawns and salmon for some of our guests and Retta to find a certain kind of beef bones for some of the dogs. Mervi was such a help in the kitchen helping me put together the dinners, well, until the apron caught fire, but we were able to put that out before pushing the BIG RED BUTTON to the Fire Department. Then, without thinking, Catherine served some champagne to some of the guests who immediately became tipsy. Well, we managed to calm them down by feeding them (I believe they all had empty stomachs and the bubbles went right to their heads) and bring them back to reality. Well, that was after we retrieved several of the cats from the over-head lights. Some of the cats also became rather "romantic" which caused another problem but we also distracted them by sending in the CanCan dancers to do a few numbers.

Luisa  17.01.2008
... all attended Can Can dance when Lady Marean and her Kitty enter, George and Harry and turned the eyes for Kitty - she is the more beautiful black cat than me already ví Harry said, the one that Miffie answered: - ei! I am also in that, perhaps she likes a beautiful gray subject like me! Kitty looked with disdain for provoked them cats and beautifullye sat down beside Delilah. Wolf very kindly presented Lady Marean to all and Rocco asked her: Could you tell us some stories about King Knut? And all made great wheel in turn of the nice lady bear. 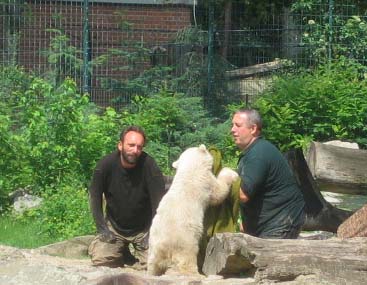 She counted: well children... when Knut everything was born it changed at the zoo, did he make a lot of noise, did he scream the whole time for the hand of Mr. Dorflein, and did we badly get to sleep, when did he leave the first time a cotton ball it seemed, very curious he moved in everything, did it drop the doctor's bicycle, did it step in my food, did he move with Kitty - but didn't I like and did I give a small push in him, it was not? Kitty said. Well.. as I counted.. the baby went growing and becoming friend of all, always ready for new pranks, his first bath was very funny: Mr. Dorflein prepared everything to give bath in Knut but actually Knut gave a great bath in your dad... we laughed a lot attending that: All dirty Knut balancing the body and all wet TD to want to catch the kid

... they happened many strange " things " in the enclosed document on this time: uncle Ronnie always sought the snack and he didn't find and Knut tried to convince that he had already eaten and forgotten, uncle Ronnie said: I am not gentleman without head, and my stomach is empty, I definitively didn't eat still! the one that Knut answered: you are being a lot forgotten, you should bring more snacks... that Knut!... It also had the day that uncle Marcus sought hopelessly for your cellular telephone... but this is another story, I count after it proves Eva´s soup...

Doro II  17.01.2008
While the pets were being seated at the Fireside Café Lila piped up: Have you seen Floyd around? I’ve looked everywhere and he’s vanished. What’s he up to now, said Fry. He’s always been such an adventurous little guy. I remember him riding of top of mummy’s van when he was little. Oh dear, what will she say when we get back without him? True, we let her live in OUR house but still ... Lots of chair shuffling and general excitement. Anxiety reigned. Wolfgang von Rottweiler started organising a search party. Amidst all this chaos the door opened, and in breezed Floyd, grinning like a Cheshire (or rather South Essex) cat and looking as if butter wouldn’t melt in his mouth. What’s all this about, he cried, you’re not looking for me, are you? Well, here I am, back like a bad penny.

Look at me, do you see any difference at all? I remembered mommy talking about my tuxedo markings, and guess what I did! I sneaked up to the tattoo parlour and had a tattoo made – the cutest little bow tie imaginable. Don’t I look like the perfect little gentleman? No way, giggled Rocco, you rather remind me of a waiter – woof! Oi waiter, a T-bone steak minus the steak would be just the thing! Put a sock in it! said Floyd, and listen: the Tattoo Zoo was packed, and d’you know why? The ladies with the sharp instruments had got hold of a whole flock of reporters from a certain press whose foreheads were now sporting the word “Moron”! Tee-hee, serve them right ...