This morning we decided to be good tourists and pay a visit to the KaDeWe. Well, I hate shopping and I panicked already at the first floor. These fantastic boutiques are not for me – neither the sizes nor the prizes!. It was really stupid even try to go shopping because when we arrived at the zoo there were long queus and it took us about half an hour to purchase our tickets. Well, better late than never!

We walked quickly to Knuti’s enclosure where our fluffy friend was napping. We stood there quite a while just watching the peacefully sleeping little bear. He looked so incredibly lovely but at the same time so vulnerable. I found myself wondering what his future will be? Who’s going to take care of him? Who’s going to defend him against greedy people? Knuti loves to be loved by his visitors. He trusts that all the people love him and isn’t at all prepared to meet the cruelty of life! How I wish I had some magic powers to make him have a happy bear life!! My husband noticed that I was getting very emotional fighting against the tears so he suggested we should take a walk and so we did.

Outside the souvenir shop we met Liesel and had a little chat with her. Liesel  recommended us to taste the curry wurst in the restaurant but after the king size breakfast at the hotel we couldn’t even think about eating….not yet…Usually I think of eating quite often…some people might say I think of food all the time… 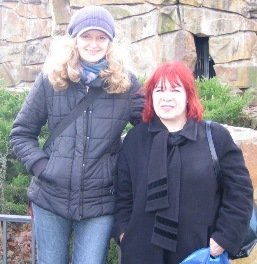 Now I saw a long, blond, pretty girl approaching us and I guessed that would be Nene. We had been joking  about the blond giant meeting the redhaired dwarf! And yes, it was Nene! It felt like I met an old friend since we’ve been writing and joking on Knutitours blog frequently.

It would soon be the feeding time for Bao Bao so we decided to go and see that. For some reason the feeding was very belated but it was worth waiting! The beautiful panda looked so cute sitting there holding his food between the paws. He really has wonderful manners at the dinner table! 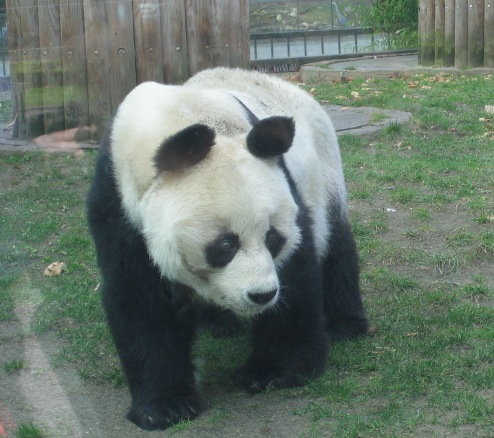 When we had admired Bao Bao we went back to Knuti and there he was giving a climbing & waving show. I’m so impressed by his climbing skils! He even climbed the stones backwards!! Between the climbing rounds he sat down and waved to the public. Sometimes it looked like he was counting how many we were. I know I’m imagining, but I think he looked straight to my eyes and smiled at me many times….I hoped those persons calling him a beast would have seen him at that moment. Well, of course, they have seen ‘this Knuti’, too, but that kind of pictures don’t sell. 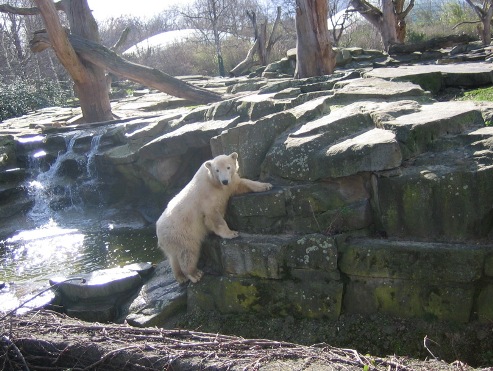 Must check that my cute paws are presentable. Maybe I need a pawicure...

Nene said afterwards something very interesting. She thought Knuti sees his public like some sort of entertainment. He watches us like we watch the telly. I must say I’m very glad to have been a part of Knuti’s entertainment!! 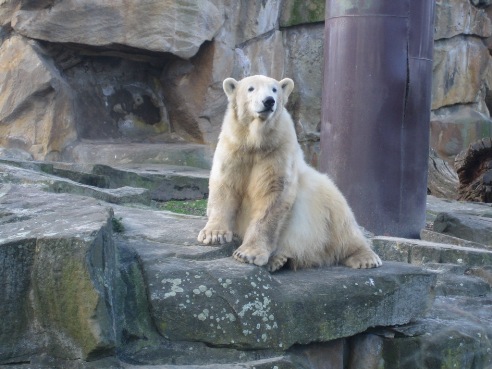 Why haven't I got a camera to take pictures of you???

I had given instructions to my hubby to take a picture if he happened  to see a redtop doctor on a yellow bike. It was supposed to be a surprise to a certain lady in San Diego. Well, he did caught sight of Dr Schüle but the good doc was cycling as he was training for Tour de France so Vesa  didn’t have a chance to take that picture…Sorry!

What now – there’s a rbb team asking my hubby for an interwiew. He shooked his head and pointed at me but because they wanted to make the interwiew in German Nene kindly answered their guestions. It was about a newspaper article – I’m not sure which one but I think Nene stated her point very professionally! Now we have another Knutian celebrity!!!

While we were standing and chatting another Knutian lady joined us – Gitta who had come to the zoo with her sister (but without Dusty). Only a few minutes later even SpreewaldMarion joined us. Again I was more and more convinced that the members of the Wild Herd are wonderful persons! It was so easy to start talking – I didn’t feel that we were actually meeting for the first time.

SpreewaldMarion (in a red jacket) and Gitta (the blond lady)

We decided to wait for Knuti’s feeding by the enclosure to be sure to have good spots where we could see something. We also thought maybe today we could take that picture I’ve been dreaming of for months…As usual there was a big crowd and I tried to use my elbows to keep ‘my spot’ but there were also children and of course I had to let them come nearer the glaswall. Next time I will  take a ladder with me….or grow a couple of decimeters!! Do I smell food?

WHERE'S MY LUNCH? I'm getting inpatient!!! 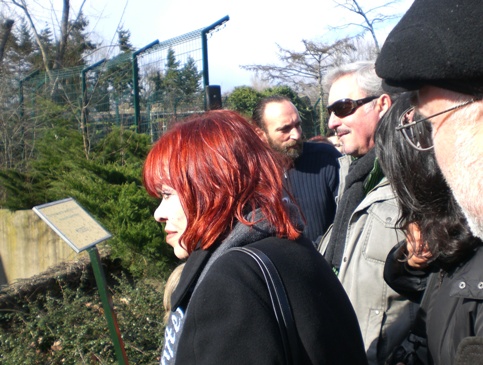 Finally!! Daddy came with Knuti's lunch! As usual TD was surrounded by curious visitors who wanted to ask all kinds of guestions.

Now I heard my hubby’s voice saying the camera’s battery was dead! Damned, guess who had promised to take care of the loading…. I wanted to bang  myself in the head like Basil in Fawlty Towers…and I felt like Manuel… the worst part of the whole thing was that there was no one else to blame but myself!! Some unprintable words were said, of course!!!!

We stayed a little longer but started then walking back to the hotel to get some rest before it was time for dinner in Dumba’s home.

Back at the hotel we had a message – an email from Dumba telling us her real name and giving detailed instructions how to get to her place. It’s so funny – we call each other by our blog names and hardly ever think that we even have our real names. Well, some of us use their first names on the blog like me. Anyway, that was very kind of Dumba to inform us - it might have been a bit difficult to figure out what her real name is....

We had been walking and standing again almost the whole day so we took a cab instead of a bus. By the way the taxis in Berlin are very cheap compared to the taxis in Sweden.

Even if we were quite early Dumba was already waiting for us in her lovely apartment. She had prepared a most delicious dinner which we enjoyed very much! We had such a good time together with lots of joy and laughter that we missed the Abendschau. We wanted to see if the interwiew with Nene was on but we totally forgot the time. Well, we had seen the interwiew ‘live’ already ….

Of course I just had to borrow Dumba’s knuputor to take a teeny weeny peek and even write a few words on Knuti’s blog. I also learnt a couple of very useful German words but I promised Dumba not to mention the other one here, hihii…The other one is Betthupferl! Isn’t that a wonderful word! Betthupferl is something children get before going to bed – usually something sweet. I call a night cup a Betthupferl nowadays.

Well, everything has an end and it was time to say good bye for this time. Thank you, Dumba, for your hospitality and wonderful company! We really had a good time!

This was our second day in Berlin – tomorrow it’s a new day with new experiences!

Before I fell asleep I suddenly remembered THE PICTURE. We forgot all about the picture when the battery went dead. I wonder if I ever will get it…. 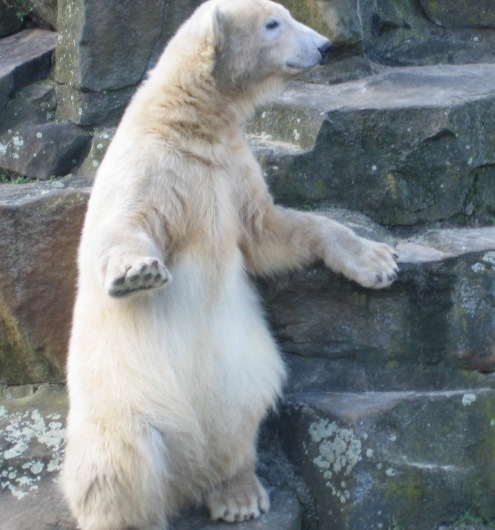 I expect to see you here tomorrow, too!

A hint: See Nenes photos of the 18th of March