When we arrived in Berlin late in the afternoon it was raining cats and dogs - not small polar bears to my big disappointment! It was too late to go to the zoo so we just unpacked our suitcases and went out for dinner in a nearby Italian restaurant. The hotel where we stayed is nowadays a non-smoker hotel so I was dying for a cigarrett. Standing in the pouring rain just didn't feel very inviting. When we came into the restaurant the first thing I saw was an ashtray. I asked the waiter - not the fluffy one - if smoking was allowed and when he said 'yes' I was in heaven!

Since we had been travelling all day the good dinner made us feel quite tired and we decided for an early bedtime. Next day the real adventure would begin!

In the morning we had a hearty breakfast at the hotel and I must say that in Germany they really know what the word 'breakfast' means. No continental stuff here!! There's nothing wrong with the croissants as our friend Knuti knows so well but I want something more to start my day! Now it was time to go to the zoo and I was so excited I almost ran....There was no queu so we got our tickets very fast and went directly to Knuti's enclosure.

And there he was, our darling Knuti, already playing with his jutebag! What a feeling to be so near him!!! There were not so many people so I went as close to him as I could and started blowing kisses and delivering greetings from everybody exactly as I had promised. Just picture - I was standing there speaking to Knuti in English, German and Finnish...My hubby stood behind me with that 'I don't know that crazy woman' look. 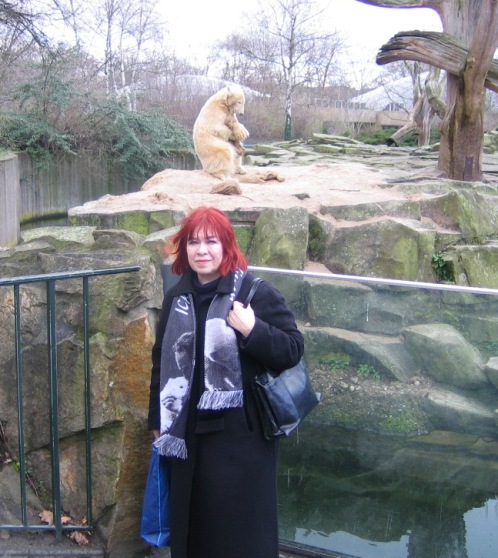 For a little while we could have Knuti almost for ourselves!

I'm convinced Knuti recognized me and wanted to make the show even if the audience was quite little. Every now and then he looked straight to my eyes so as to make sure I was watching and admiring him and of course I was! He was so sweet - the lovely eyes, the lakritznase and the cute paws....I wish you all could see them live! I don't think he has grown so much after my visit in December but the legs look a little longer and maybe he looks a little bit more like the big ones. And he has a cute beard, too.

He is funny and touching at the same time. The tricks made me laugh and the way he sometimes held his jutebag - just like a child holds his teddybear - brought tears in my eyes. 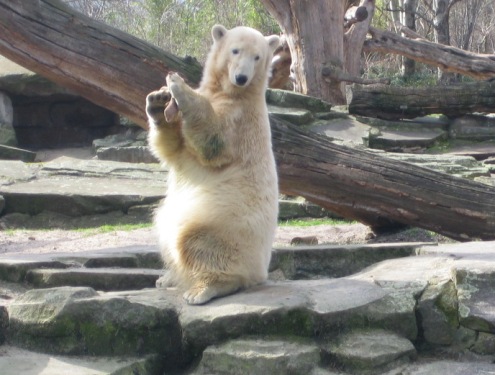 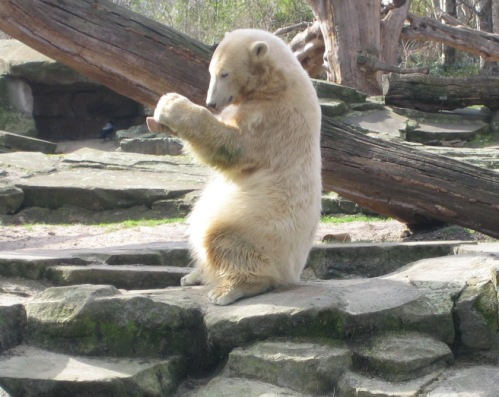 Knuti is still een kleenet Kind and needs to rest often so after a while he wanted to take a nap so we went to the zoo restaurant to have a cup of coffee to warm us. At 11 o'clock I told my hubby it was time for the feeding of Lars and his babes. Of course, I was wrong - when we came to their enclosure the feeding was over - we were half an hour too late. Why, oh, why did that husband of mine listen to me this time???? He usually double checks everything that has with time to do!! 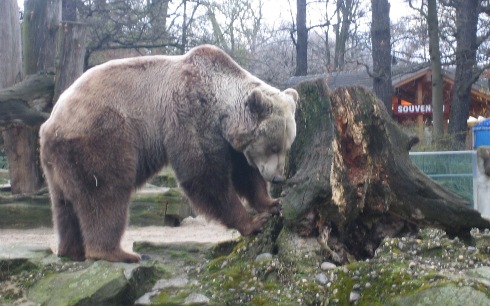 Knuti's neighbour - the bear who mostly seems to be meditating.... 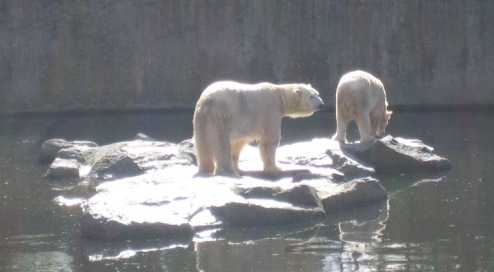 Well, the bears were still eating their lunch in the water so we stayed and admired them. After finishing the lunch we could see Katjuscha playing with the car tire. She seemed very interested in it - maybe she'll be a new Knurmula 1 driver K. Knumacher - who knows! Lars and Tosca seemed to have a thing going on and later I saw in Liesel's photos that it was true, hahaa...Nancy mostly walked around - maybe she wanted to motion away the lunch calories. Suddenly I heard a voice calling Mervi and when I turned around there was BarbaraBerlin. After some hugs and 'how are yous' we all walked back to Knuti who was still napping. We were wondering what we would do next when we caught sight of a lady waving with her umbrella. It was Dumba. How wonderful to meet her again!

We decided to take a tour at the zoo. The lion cubs had crown a lot but they are still baby cute. We even saw the leopard, tiger and visited the night animals. We noticed that akk the babies like to roll on their back and wave with their paws. Dumba, BarbaraBerlin and I thought we start doing the same thing - it looks so relaxing! Well, we didn't start doing it at the zoo ....

It was quite chilly and windy so we went for a cup of coffee again. We had a nice chat and Dumba kindly invited us to her home for dinner the next evening. What a generous gesture! 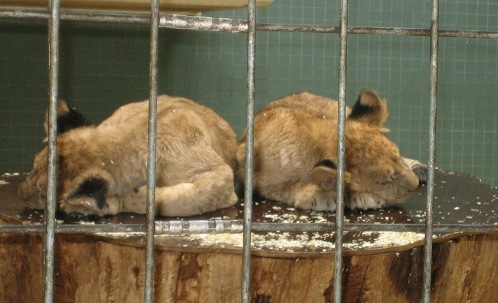 The sweet little Max and Moritz

After the coffee it was time for Knuti again and now he was awake. There was quite a crowd in front of the enclosure now so we tried to find a spot where we could see better. Now I felt a tap on my shoulder and someone was asking if we were bloggers from Knutis blog. It was BarbaraMünchen! Another lovely Knutian! 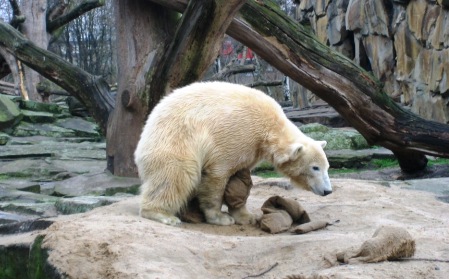 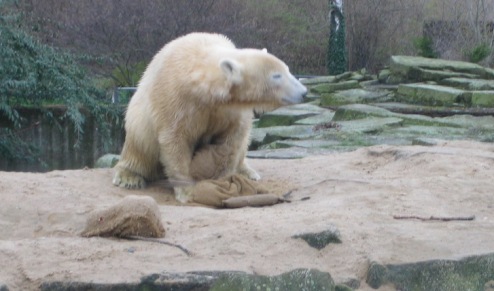 We all went to see the feeding of the wolves and there I met Liesel, too. Marcus Röbke took care of the feeding today but when we continued to the coyotes and nosebears we saw TD and Daniela coming as well. They were standing at the enclosure watching the feeding but when it was time for Knuti to get his dinner it was TD who threw the fish, carots, salat and a little pumpkin to the water. Knuti wasn't too keen to get into the water but finally he couldn't resist the food and jumped in. He's so funny getting a fish and carrying it to the stones where he eats it. Then another round, then another. He didn't eat anything in the water. BarbaraMünchen had brought some fresh croissants and asked if Knuti could have one but TD said no. 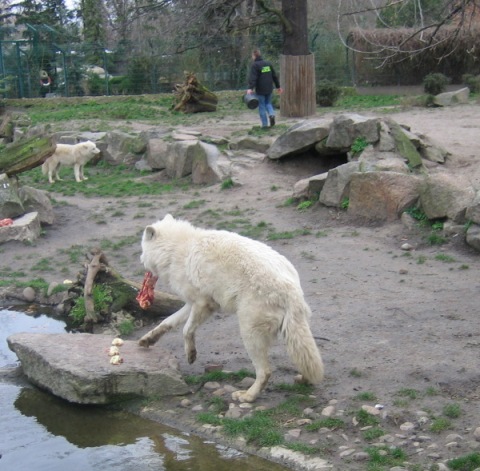 Marcus Röbke has just served the wolves their dinner 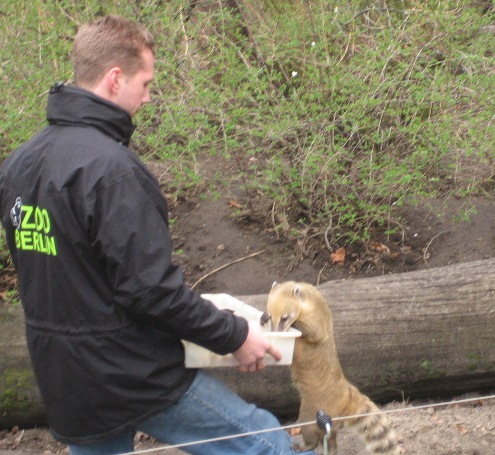 The nosebears are always so funny.... 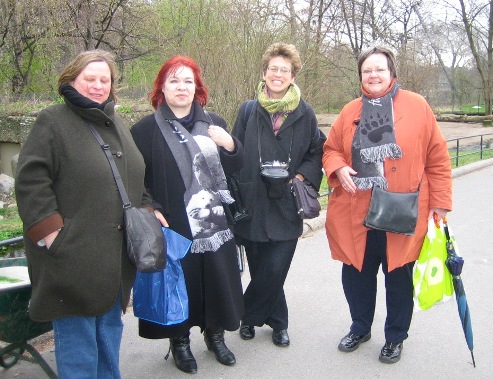 Four merry Knutians: BarbaraBerlin, Mervi, BarbaraMünchen and Dumba. Thank you all for a lovely day at the zoo!

We had such a wonderful time but it was time to try to see a little of the city of Berlin, too so we left for a little rest at the hotel. Besides all the walking and standing made my feet and my back remind me of their existence!

After a night in the city we were so tired that we slept like knubies till next morning.

A hint: See BarbaraBerlins photos of 17th of March